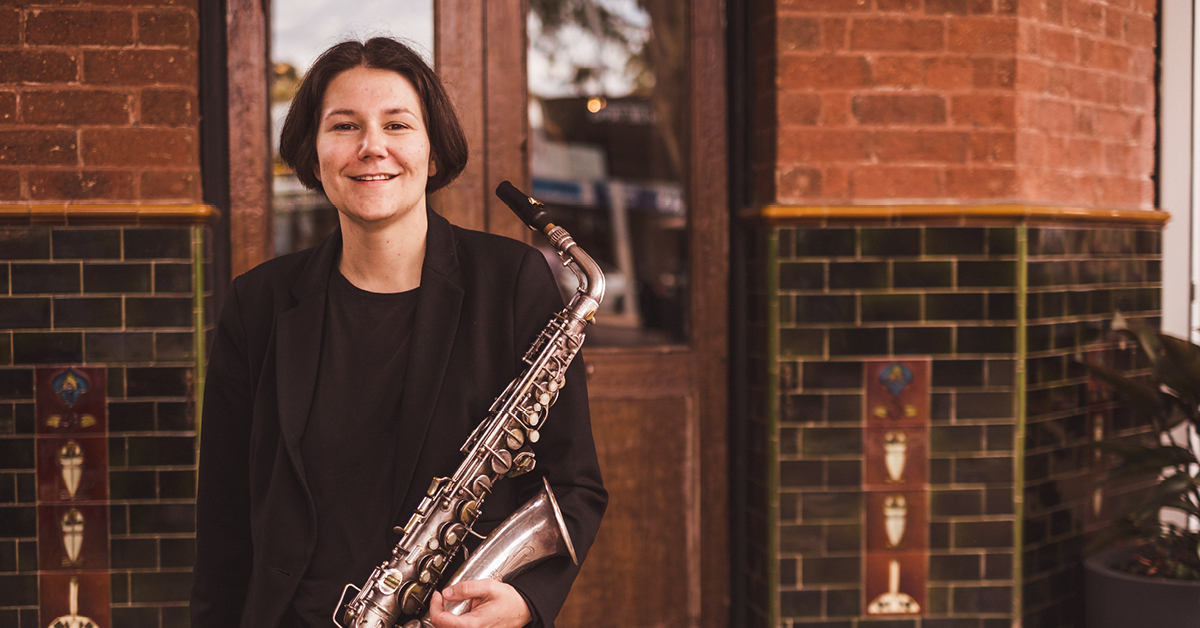 Gemma Farrell is a jazz saxophonist, composer and educator. She is a PhD candidate and lecturer in jazz studies at WAAPA. She has led the Young Women in Jazz program for WAYJO since 2014. In 2022 Gemma started the Womxn in Jazz Composition ensemble, a large ensemble at WAAPA dedicated to performing the music of people of marginalised genders.
Gemma has a Master of Music degree from the Conservatorium van Amsterdam and a Bachelor of Music with Honours from the Queensland Conservatorium. In 2020 she won Best Brass, String or Woodwind Instrumentalist at the WAM awards. She has been nominated for 7 WAM awards prior, including Best Brass, String or Woodwind Instrumentalist (2018, 2019), Best Jazz Act (2018, 2019), Best Funk Act (2007), and Song of the Year – Jazz (2016, 2018). Her band, the Artemis Orchestra, is currently nominated for Song of the Year – Jazz 2021.
Gemma was one of three finalists for the 2022 Australian Women in Music Awards in the Humanitarian category. She has released eight albums as a leader and is one of 16 Australian musicians nominated for the Freedman Fellowship Award in the Jazz Category.
Recently, Gemma was a guest artist with WAYJO’s Monday Night Orchestra, showcasing the saxophone family, EWI and her original compositions as a part of their 2022 program.
The Gemma Farrell Quintet is Gemma’s principal project as a leader. In 2018 they released their album “Organised Chaos,” a local feature album on RTRFM. The Quintet completed an Australian tour in 2019, performing at the Perth International Jazz Festival, the Sydney Women’s International Jazz Festival, JMI Brisbane and the Jazzlab in Melbourne. In 2021, they performed at the Perth Festival, the York Jazz Festival, and PIJF “On Tour” in Busselton. After further PIJF “On Tour” performances in Margaret River and Mt Barker in 2022, The Gemma Farrell Quintet released their second album, “The View From The Top,” launched at Lyric Lane in May 2022, and also a local feature album on RTRFM.
Gemma is the founder and musical director of the Artemis Orchestra, a predominately female big band that performs the original music of Australian women, non-binary and transgender people. Their debut album “Elephant in the Room” was released in June 2021. It was a local feature album on RTRFM and also featured on ABC Jazz Radio. It received a five-star review in Dingo Australian Jazz Journal. In 2021, the orchestra performed at the Perth International Jazz Festival and RTRFMs In The Pines Festival. In 2022 they performed at the Lyric Lane Jazz Festival and Hidden Treasures Fremantle.
MFG is Gemma’s project with Cologne-based guitarist Nico Maas and Zurich-based keyboardist Thomas Goralski. MFG has released three albums and completed two Australian tours and a European tour. MFG is hoping to tour and record again in 2023.
In August 2018, Gemma travelled to Stockton, California, on behalf of WAYJO to be a tutor at the Brubeck Institute’s Summer Jazz Colony at the University of the Pacific.
Gemma performed alto saxophone on the Mace Francis +11 album “Isolation Emancipation,” which was released in November 2021 and featured on Foxtel’s “The Scene” in March 2022.
Gemma also performs in Farrell Garner Gardiner, the Namora Nonet, The Perth Cabaret Collective, Perth Saxophone Rockers, and the 950 Express.