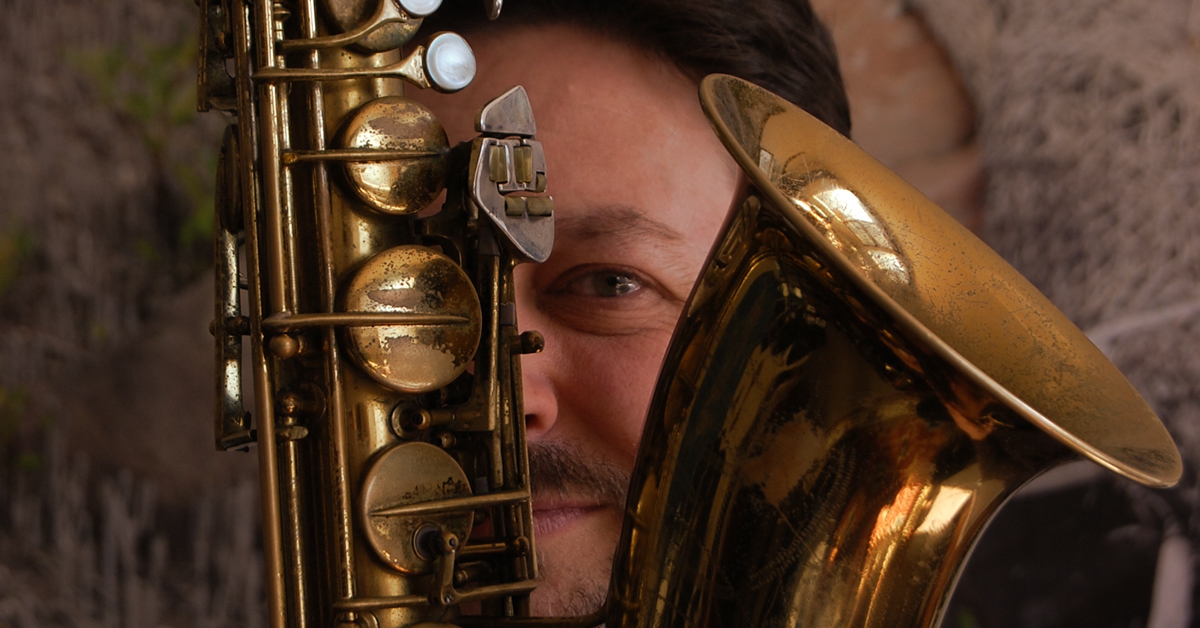 Multiple award winning Melbourne saxophonist Julien Wilson has been one of Australia’s outstanding voices on the tenor saxophone for close to three decades. He is featured on albums by luminaries including Barney McAll, Stu Hunter, Mike Nock, Jonathan Zwartz, Kristin Berardi, Sam Anning, Andrea Keller and Vanessa Perica and has shared the stage with Jim Black, Kurt Elling, Bob Moses, Hermeto Pascoal, Charlie Haden and the Sydney & Melbourne Symphony Orchestras. He founded Lionsharecords in 2013 to release his own music. The label debut, This is Always, an album of jazz ballads with Allan Browne, Barney McAll & Jonathan Zwartz, received the first ever Australian Jazz “Bell” Award trifecta for Best Album, Best Composition and Best Ensemble.

Julien’s long standing trio with Stephen Magnusson and Stephen Grant has been hailed as “one of the most original groups in Australian jazz” (Jazz: The Australian Accent. John Shand UNSW Press) and have played sold out shows at Jazz festivals in Berlin, Indonesia, South Korea and the Sydney Opera House. In 2020 he released an LP with his quartet STOCK that debuted at #1 on the Australian Independent Records Charts. He is a member of cooperative groups including This World, SNAG, Assumptions, 12ToneDiamonds and Festa, and has made long term contributions to established ensembles including The Black Arm Band, The AAO, Ishish, Virus and Los Cabrones.

But this marks the first time he has released a solo album. And he is releasing not one, but a contrasting/complimentary pair of LPs, created during the interminable Melbourne lockdowns of 2020. With just a saxophone and some effects pedals Julien has created a collection of spontaneously composed otherworldly Melodic Electroacoustic Cinematic Soundscapes. Forget what you think you know about “solo saxophone” or “electronic/ambient music” or “free jazz”. This is all of those, while being none of them.

Wilson employs soft warm tones, space, and a variety of electronic effects in real time to transform his evocative melodies in to hypnotic atmospheres and half-forgotten dreams. His approach to playing solo in this instance is to treat the performance as a sacred place of purity, free of judgement and genre. “I try to be open enough to let the space inform what I’ll play rather than imposing preconceived ideas on it”.

In the liner notes to Meditations, music journalist, John Shand calls the music “as close to directly communing with another human soul as art can contrive. Light shines through this music – muted, like afternoon sun through a high window”. He goes on to observe that the electronic effects create “environments in which the saxophone unfolds its stories (of fathomless humanity), rather as birds sing in trees.”

In the liner notes to Mutations, Adelaide multi-instrumentalist and all-round musical raconteur, Adam Page describes it as “An expanding Universe of sound bursting with sentience – like nothing that has come before it. An imperfectly perfect melding of acoustic and electric, earth and air, tar and crystal. Musical boundaries evaporate. This is permanent. Immediate. Resplendent. This is NEW.”